This story was originally published on the NH Coastal Adaptation Work Group blog.

“After the storms of 2006 through 2008, there was talk in the industry that the storms are changing,” said Ridge Mauck, who works for the Alteration of Terrain Bureau at the New Hampshire Department of Environmental Services (NHDES).

‘The industry’ is construction, engineering and development companies that work in New Hampshire. And the talk is true: parts of New Hampshire have seen up to 10 times more extreme precipitation events since 1960 because of climate change. Many remember the Mother’s Day storm of 2006 that dumped between 10 to 15 inches of rain over 4 days or the 4-inch 24-hour Patriot’s Day storm of 2007. But it’s not just storms—New Hampshire is seeing more total average annual rainfall, with the rate of increase quadrupling over the last four decades. The trend will continue with climate change expected to cause between 13 and 20 percent more rainfall by 2100 with more falling in intense storm bursts. 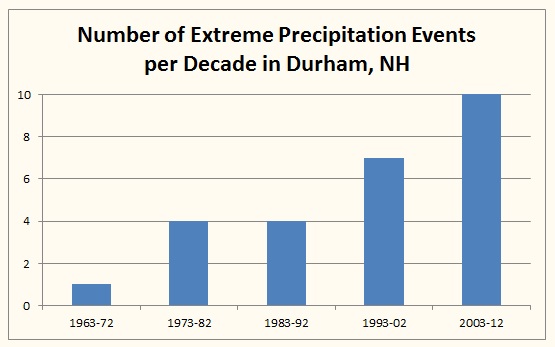 Trends in extreme precipitation events per decade (greater than 4 inches of precipitation in 48 hours) at the GHCN-Daily station in Durham, New Hampshire, 1963–2012. Data source: Climate Change in Southern New Hampshire: Past, Present, and Future published by Climate Solutions New England

So why are developers paying attention to rain? One reason is that when a developer plans to disturb an area bigger than 100,000 square feet or any area with a 25 percent grade within 50 feet of surface water for a project such as a housing development or big box retail 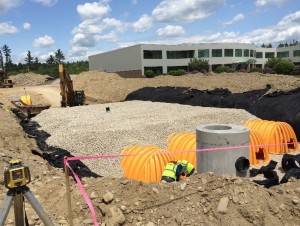 store, NHDES requires what’s called an Alteration of Terrain (AoT) Permit, which factors in the amount rainfall that will need to be managed on the site. The permit requires developers to show in their building plans how they’ll manage rainwater on-site to maximize infiltration and decrease the amount of runoff leaving the site.

Up until recently, a developer was required to use average annual precipitation data from an index developed by the National Weather Service (NWS) that is based on historical data from the 1930s to the 1970s to figure out how much rain falls on their property every year. But the old rainfall data doesn’t reflect today’s realities. To fix this, in January 2013 the NHDES Alteration of Terrain Bureau made a switch, now requiring the use of a new Northeast precipitation dataset that includes historical rainfall data up to 2008. The dataset was created by the Northeast Regional Climate Center at Cornell University because researchers recognized that the outdated NWS dataset meant that decisions were being based off of old, incorrect information.

“It just makes sense to use the most current data—prior to the Cornell project it just didn’t exist,” Mauck said.

Accounting for the rain 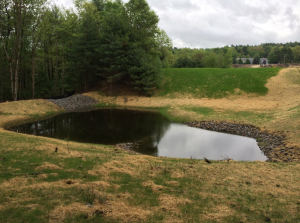 A detention pond holds stormwater runoff from a nearby roadwork project that required an AoT permit in Nashua, NH

Impervious surfaces, like pavement and roofs, that are added when a development goes in result in rain running off as stormwater instead of soaking into the ground and vegetation. The stormwater enters town drainage systems and, eventually, nearby water bodies. The increase in extreme rainfall we have experienced coupled with increases in impervious surfaces cause flooding, erosion, and water pollution—issues that are costly to repair and remediate and much less costly to prevent. This is where the AoT permit comes in.

“Large developments that cause disturbances in existing stormwater controls have to meet certain stormwater treatment criteria so they don’t cause more flooding and pollution,” Mauck explained.

To get permitted, developers use modeling techniques to compare the amount of rain that runs off the land before construction to the amount of rain expected to run off after construction. They are essentially required to show that they will be able to keep peak stormwater runoff at the same levels that existed prior to development in both a 10-year and 50-year, 24-hour storm—or rather storms that have a two percent chance and a 10 percent chance of occurring in any given year. Developers can design for these storms with water detention structures like detention ponds and swales, rain gardens and barrels, more pervious, absorptive surfaces, and other low impact development strategies at the site of the building.

So what does new rainfall data really mean for these development site plans? Because more rain is falling and big storms are becoming more common, in some cases developers may have to enhance their stormwater retention capacity a little. In fact, Mauck says some developers have adjusted their site plans slightly to make more room for stormwater infrastructure. Overall, he says the transition to the new rainfall data has been pretty seamless—following some communication efforts, members of the industry quickly understood that they needed to use the new data. He estimates that the Bureau approves about 150 to 170 permits per year (prior to the recession the number was more like 360 to 380, and it’s slowly climbing back up). 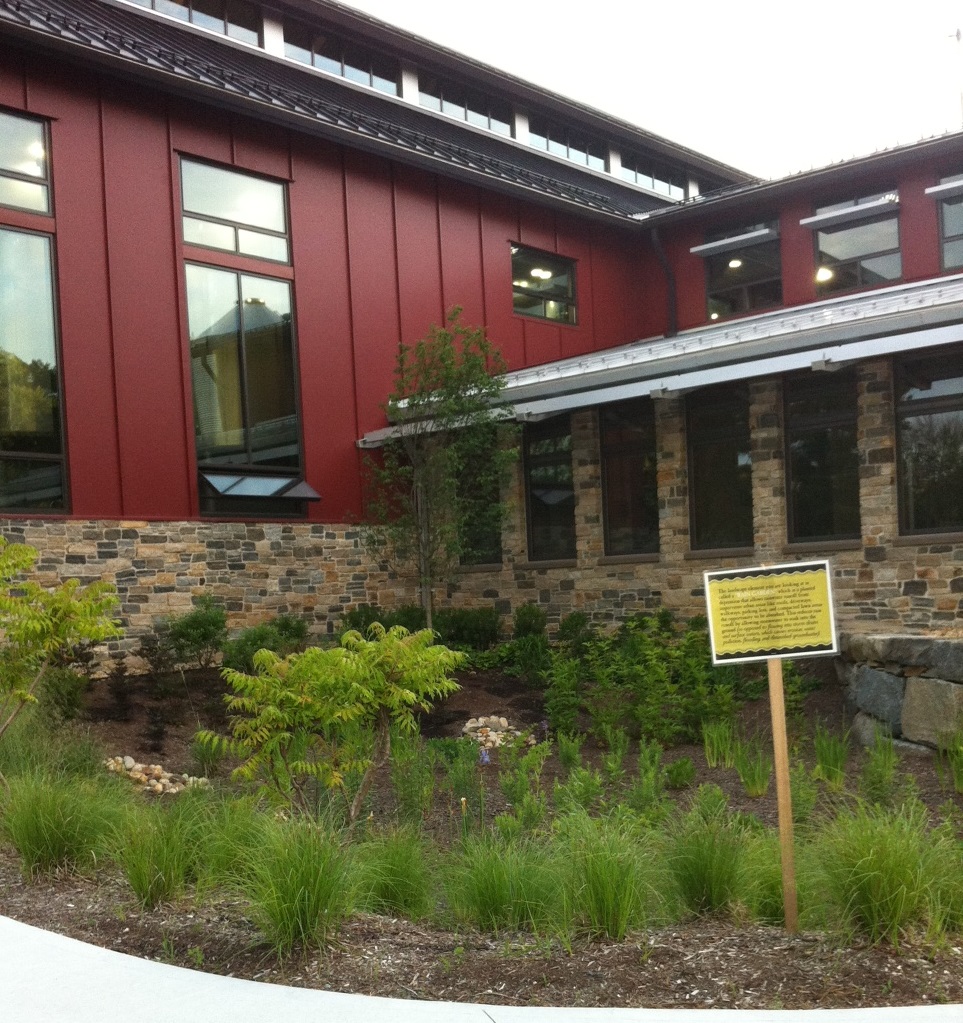 The new Smuttynose Brewing Company headquarters in Hampton, NH required an AoT permit. This rain garden is one of the best management strategies the company is using to capture stormwater runoff from the new building. 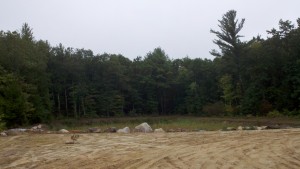 A detention pond awaits the next rain storm in Raymond, NH

Though the AoT permits now require more current data, they’re still based on historical rainfall information that is already six years old. Since precipitation in New Hampshire is expected to continue increasing by up to 20 percent by 2100, new permits will once again underestimate current rainfall and developers will underestimate their stormwater contributions in the coming decades.

“The challenge,” Mauck says, “is it’s a moving target. At some point you have to pick what to base the permit on. We could try to project into the future but we’ve always been based on yesterday’s storms.”

Mauck explained that while the switch to the Cornell data was fairly simple for the Bureau because it was consistent with their mandate to use the best available rainfall information, basing the AoT permits on future climate projections would be more complicated. It would require a rewrite of the Bureau’s rules, which would take time. For now, they’re sticking to the best available historical data. NWS is finally planning to update its data for the Northeastern United States by 2017, but in the meantime, the Cornell data will continue to be used, helping the state minimize mounting risks from the bigger floods and the polluted water bodies that are an unfortunate consequence of the climate-influenced rains. 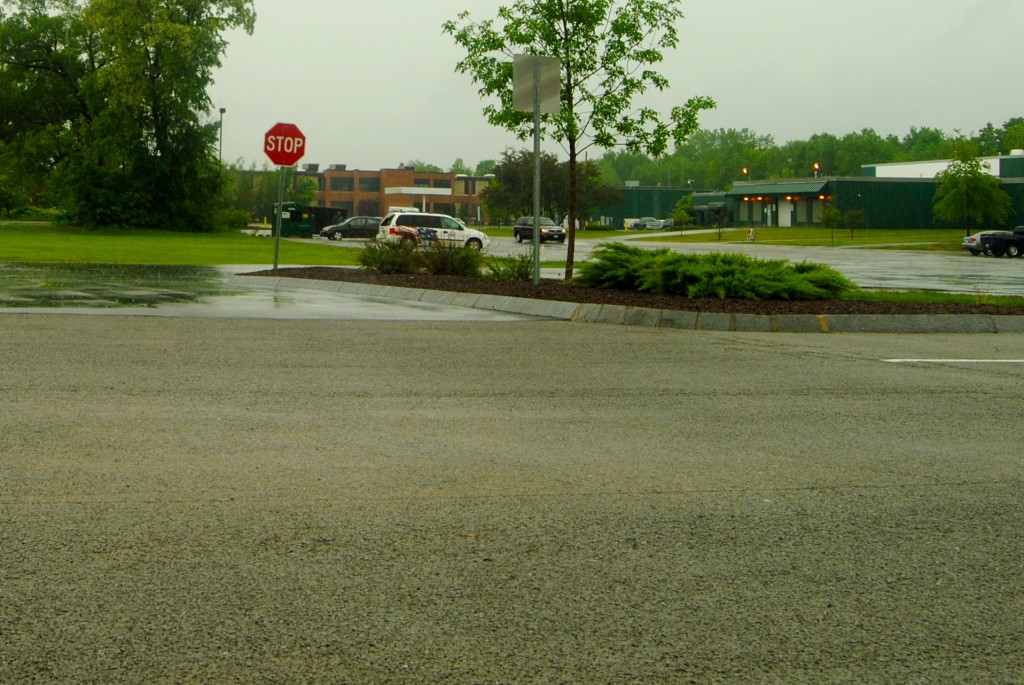 During heavy rains in Keene, impervious pavement in the distance causes stormwater runoff while new, permeable pavement (the part that looks dry) in the foreground allows stormwater infiltration.